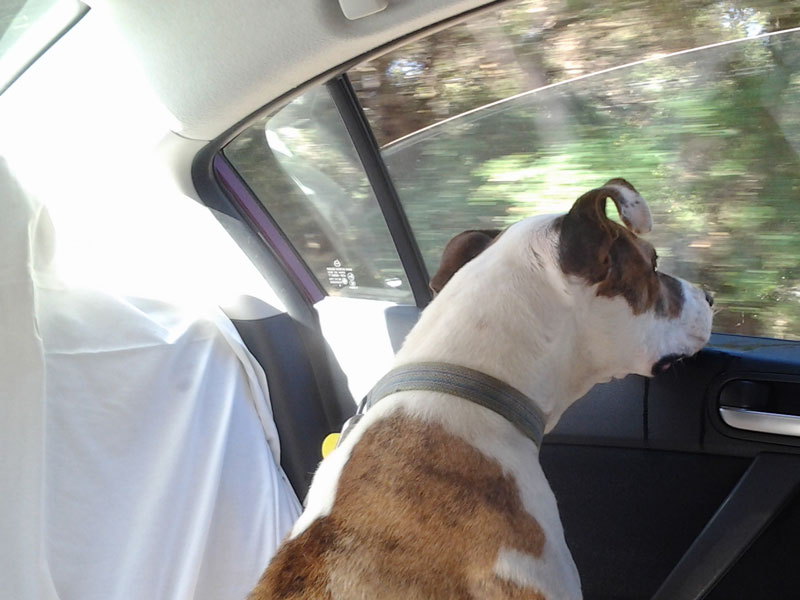 Where in the world is this place in Temecula? Or is it Murrietta? My wife Kelli and I were wondering what we’re getting ourselves into as we headed through the hills north of Escondido last Saturday. She was on call for work. I’d just gotten home from my new job and skipped a nap so we could speed on up to this “park” some 40 miles north of our place in Escondido. There we’d have a transfer of Kismet (a female Amstaff/Boxer mix), with Sam and Melissa heading down from Yucca Valley, overshooting the half way mark to help us stay in range just in case Kelli should take a call for work. Where we turned up was in a trailer park, er… mobile estate community. Forget the drug trade. This was the dog trade. Parked on a random street with just enough shade to take a bit of the heat off, we met Kismet and had about 20 minutes of instructions, chit-chat, and catching up. But Kismet was the star of the show and after her wire crate and food and meds were in the trunk, we had a short walk with Sam and Melissa, and then Kismet was climbing into our car to head back to Escondido.

Fostering is a new way of relating to a dog. We’d both had a dog in our childhood or school years, and we’d kept a friend’s dog for a year or so, and then had one of our own up until March of this year. Melissa was so supportive in that period that it seemed we ought to try our hand at fostering when the time seemed right. Just a few months removed from losing Buber the Dog, we’re still adjusting. The house has been rather silent. There have been no w-a-l-k-s. No cute creature seeking cuddle time. Fostering would give us a chance to stay in touch with dog care but would not ultimately be a permanent relationship. It seemed about right.

Just a couple weeks ago we heard about Kismet. She’d been found wandering around a strip mall up in the desert. Seemed pretty healthy despite her foraging diet, probably consisting of some unsavory critters. She needed to be spayed. Gentle and eager to please but also needed pack training and some boundaries since she likes to escape whenever possible. She didn’t seem too steep an order for first time fosterers.

As of now it’s been just half a week since we got her home. Her daily feedings so far have included some additives to get her guts in working order, rid of worms that were found early on. She just now finished a course of antibiotics following her spaying and a claw that broke out at the bone. She’s eating almost all she’s been fed. She doesn’t seem to be bribed by treats, nor does she try to swindle us out of them either. She seems indifferent to them, really, but will eat a couple that are offered when she’s successfully entered her crate. Her new diet seems to be showing gains in her fur. The first couple days, her fur seemed like a stiff bristled brush, but now it seems silkier and smoother all around.

My impression of Kismet is that she’s quite timid. Melissa says it might just be the shock of new surroundings after being left to her own devices or living a rugged life outside, maybe with a person. I’m finding that doesn’t seem to fit what I see of her. Kismet is so timid around everything—certainly the noisy stuff like cars or a shouted command or kids playing around outside. She immediately jumps a bit, even with a steel screen door blowing shut. She is so far very submissive, skulking down with tail between the legs. Walking on the leash sort of confuses her. So far there are stretches where she’s as mild and well behaved as a dog who has learned good leash habits. But other times, she’s prone to wander just any ol’ way, but not even to sniff. It’s just random as she takes time out to survey a noise, a scent, whatever. She doesn’t seem to know what she’s supposed to do with a leash. Similarly, the word “walk” doesn’t seem to register with her. I think she’s very naive in her human dealings. If I had to make my guess, I’d say she was ignored or sequestered for a long time. She seems extremely sheltered and not adjusted to human interaction but she does love to be held like a baby. The most successful means to get her to respond to a request is to squat and offer kissing sounds. She takes a bit of time to suss things out and then generally comes along. She resists being pulled along if needed but starts to adjust. This morning, I woke at 5, let her out of her crate for about half an hour and then put her back before I left. Other mornings took me lifting her ~50 lbs to guide her to the crate. Today I did verbal commands but then walked to the crate, tapped on its top and she knew that meant it was time to enter. She went without fuss. Good dog.

Melissa kept her separate from her own dogs and other foster dogs and even here, it seems Kismet fears and isn’t comfortable around the fenced in neighborhood dogs. I don’t think we’ve encountered any up close, but she sort of freezes as we pass the fenced dogs. Unfortunately for her there are a great many dogs that make a bunch of racket. I wonder what’s going on in her mind.

That said, she’s really taken a liking to me. She moves very slowly, light on her feet, and just loves to roll over for a belly rub. But she’s made her face available and likes to put her head in my lap. She is extremely quiet. We have not heard a bark from her yet. There are a few little barely audible whimpers to let us know she needs to go out in the morning. Rubbing the back of her ears gets the loudest single response from her: something like a cat’s purr! Too cute.

Maybe she’s real tired from surgery, upsets of all sorts, or maybe she’s just a mellow, mellow dog. I guess we’ll see about that over the coming weeks.

Posted in Animals for Adoption